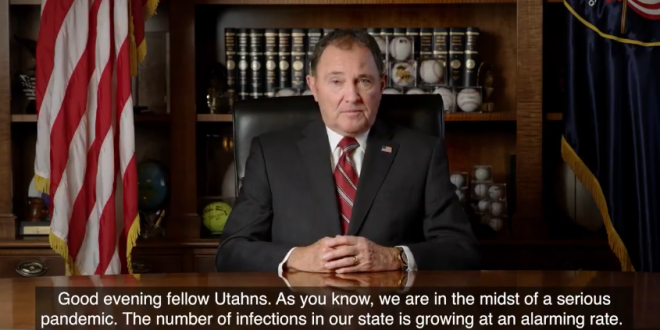 Utah’s governor declared a new state of emergency late Sunday after the state’s most devastating week of the pandemic, as COVID-19 infections skyrocketed and deaths hit new highs. His big concern is the surge in hospitalizations that may soon overwhelm doctors and nurses.

Gov. Gary Herbert issued a series of new restrictions, including a statewide mask mandate — a step he has resisted for months. Unlike other restrictions, the governor intends to extend the mask mandate “for the foreseeable future.” Businesses that fail to comply will face fines.

The new executive orders are signed by Herbert and by Lt. Gov. Spencer Cox, who is the governor-elect. They limit any social gatherings to people in the same households and place a hold on all school extracurricular activities, including athletic and intramural events.

In a video posted to Twitter late on Sunday — which Utah residents were alerted to watch via an emergency cellphone alert — Herbert also declared a two-week state of emergency and announced a spate of other restrictions aimed to curb infections, which the governor noted are “growing at an alarming rate.”

“Our hospitals are full,” Herbert said in the clip. “This threatens patients who rely on hospital care from everything from covid-19 to emergencies like heart attacks, strokes, surgeries and trauma. We must work together to keep infections low until a vaccine is available.”

Due to the alarming rate of COVID infections within our state, tonight I issued a new state of emergency with several critical changes to our response. These changes are not shutting down our economy, but are absolutely necessary to save lives and hospital capacity. #utpol pic.twitter.com/BuSNBsCbiz