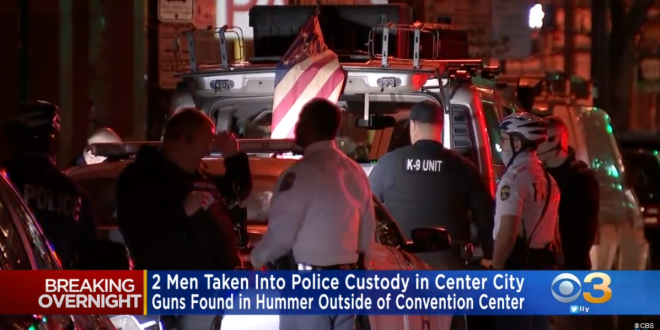 Two heavily armed men found outside the Pennsylvania Convention Center were taken into police custody late Thursday night. This comes as votes are currently being counted inside of the center. Philadelphia police say they were notified of a threat of an attack around 10 p.m. Thursday.

According to police, the threat involved a group of individuals from out of state, driving in a silver Hummer. The vehicle with Virginia tags was found on the 200 block of North 13th Street in Center City.

Authorities say they found multiple guns inside of the vehicle. Eyewitness News cameras captured one of the men being placed in handcuffs at 13th and Arch Streets.

According to multiple reports, a heavily-armed armed group is said to have driven a Hummer up from Virginia to carry out the alleged plot. No one was reported injured, and police did not identify the detained suspect or provide details about the threat.

But video showed the suspect being taken away in handcuffs and police retrieving a large gun. The Philadelphia Inquirer reported that the group was armed with AR-15 rifles.

The Inquirer also reported that a Hummer matching the description was seen with stickers linked to the QAnon conspiracy movement, including a large “Q” and “#WWG1WGA,” which the pro-Trump conspiracy theorists use to stand for “Where we go one, we go all”—the group’s motto.

UPDATE: Video showed the suspect being taken away in handcuffs and police retrieving a large gun. The Philadelphia Inquirer reported that the group was armed with AR-15 rifles.https://t.co/HN0Gj5H90o

Police say they got a tip about armed people driving a Hummer up from Virginia to the PA Convention Center. At least 1 was arrested. Earlier, Trump supporters protested to stop vote counting. pic.twitter.com/1AQEpwN55d

45 is encouraging mass murder in my home state: Police arrested two men coming up from #Virginia armed with AR-15s in #Philadelphia late Thursday after receiving a tip that they were making threats against the #Philadelphia Convention Center https://t.co/R6ewjpfnri #pennsylvania

Philadelphia police have arrested at least one armed man in an alleged plot to stop the vote counting. The vehicle involved remains around 100 yards from convention center #Pennsylvania #election2020 pic.twitter.com/7ByEe1zEUI