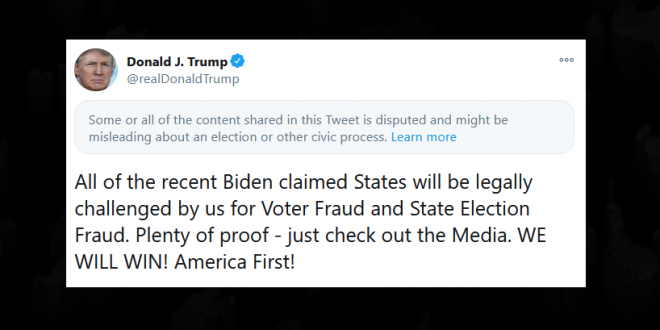 President Trump has taken to Twitter again Thursday morning, commenting on the recent states Joe Biden has won. Elections are run by individual state, county and local governments. Trump’s public comments have no impact on the tallying of votes across the country.

So far, the vote count across the country has been conducted efficiently and without evidence of any misconduct, despite Trump’s public complaints. Trump’s comments come as his campaign has filed legal action in several states to try to stop vote counting, claiming a lack of transparency.

All of the recent Biden claimed States will be legally challenged by us for Voter Fraud and State Election Fraud. Plenty of proof – just check out the Media. WE WILL WIN! America First!