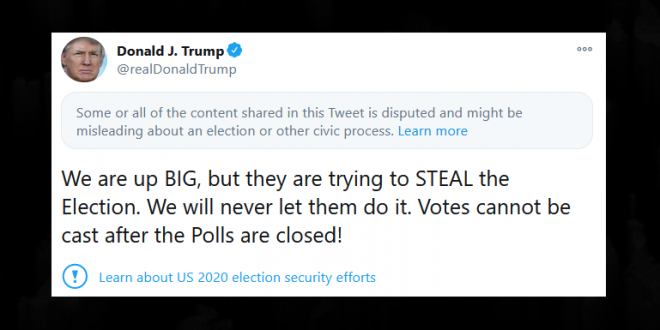 Twitter took action against the tweet quickly, placing it behind a warning and adding a misinformation label. The company explained its actions in a tweet, stating that the president’s message contained a “potentially misleading claim about an election.” As of 12AM PT the result of the presidential election remained far from clear, with both candidates holding potential paths to the presidency.

We are up BIG, but they are trying to STEAL the Election. We will never let them do it. Votes cannot be cast after the Polls are closed!

We placed a warning on a Tweet from @realDonaldTrump for making a potentially misleading claim about an election. This action is in line with our Civic Integrity Policy. More here: https://t.co/k6OkjNXEAm

Trump has now done what @jonathanvswan reported and what Trump denied he would do – came out and said “we did win this election” and called the current vote counting “a fraud on our nation.” Says he will go to Supreme Court to stop counting.

Trump wants them to count every vote in Arizona.

But he wants them to stop counting in Georgia, Michigan, Wisconsin, and Pennsylvania.