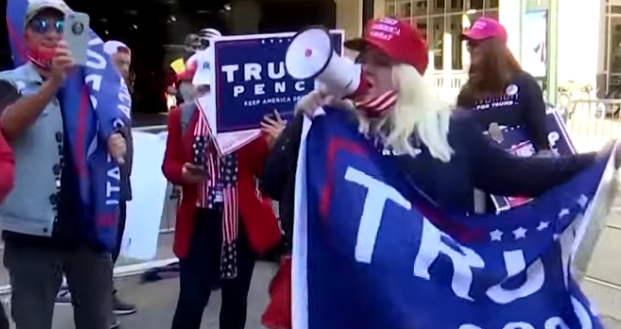 A Republican firm run by a top aide to President Trump’s 2020 campaign appears to have helped send unmarked text messages on Thursday that urged supporters in Philadelphia to converge outside a building where local election officials were counting votes.

“ALERT: Radical Liberals & Dems are trying to steal this election from Trump!” began the short text, sent in the hours before former vice president Joe Biden took the lead in the state. “We need YOU! Show your support at the corner of 12th St. & Arch St. in Philadelphia.”

The messages were sent from phone numbers that had been leased by Opn Sesame, a company that offers texting services to Republican candidates and causes, according to a person familiar with the matter who was not authorized to discuss the messages. Opn Sesame is run by Gary Coby, the digital director for Trump’s 2020 campaign.

Read the full article. Coby on the left below. Video is live.

“For us at the Trump campaign, digital didn’t start as a driving force but it ended up w/an important seat at the table.” Gary Coby #DMAS17 pic.twitter.com/UR6GYSTQOI