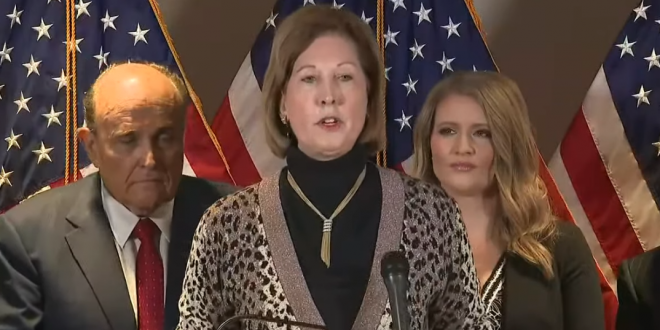 Just in from the Trump Campaign:

Just so you’re aware, Trump’s lawyer Sidney Powell’s position is that Georgia’s Republican governor conspired with the CIA to steal the election from their own party’s president to benefit from election insurance per a scheme created by Venezuela’s Hugo Chavez, who died in 2013.

I have evidence of biblical proportions about Sidney Powell stealing $755 worth of sex toys from the shop next to Four Seasons Total Landscaping, but I’m going to wait till the right time to drop it. Book me on the news shows in the meantime!

Sidney Powell now alleging that “thousands” of poll workers were secretly trained — in Venezuela, by the ghost of Chavez — to join GOP leaders Brian Kemp, Mike DeWine, Pat Toomey, Liz Cheney, Chris Christie, & every single judge in the world but Alito, who is her cousin Vinny.

Hilariously, the Trump campaign just put out a statement trying to distance itself from conspiracy theorist and liar Sidney Powell.

I wonder how many observers have concluded that Giuliani and Sidney Powell are participating in a conspiracy to commit fraud—not just election fraud but wire fraud, as their drawn-out false claims are helping Trump fraudulently raise millions daily for his own political purposes.

Wow. The Trump campaign has issued a statement saying that Sidney Powell is not associated with them.

This comes after she’s been alleging some incredibly nonsensical stuff over the past week.

But…the campaign had Powell on stage at their press conference earlier this week! pic.twitter.com/bLTmGfOp4T

2. Just three days ago, the official GOP twitter account was tweeting out videos of Sidney Powell at the press conference.

Now they’re saying she’s not involved in the campaign and doesn’t represent the president. pic.twitter.com/RTbbrxqfuu

Previous Lawyer Behind GA Lawsuit: Patriots Have To Come Together And Do What Founding Fathers Did In 1776
Next Republicans Gearing Up To Block Biden Cabinet Picks