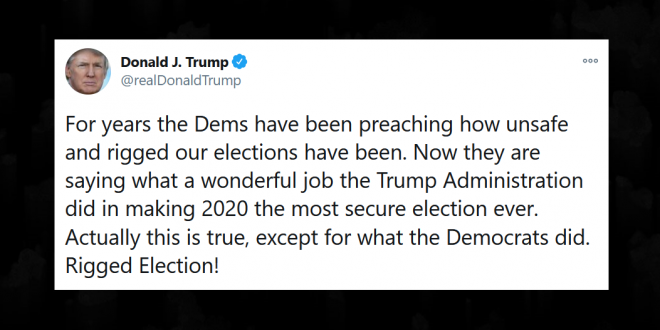 For years the Dems have been preaching how unsafe and rigged our elections have been. Now they are saying what a wonderful job the Trump Administration did in making 2020 the most secure election ever. Actually this is true, except for what the Democrats did. Rigged Election!

I want to make a joke about the contradictions in this tweet but it’s already in the tweet. https://t.co/YQHILM0yRF

The president wants credit for the safest election in history while claiming it’s been stolen from him via massive fraud. https://t.co/X9OGRxkhpx

Democrats say elections are rigged but I did a great job making sure they aren’t rigged. That said, the election that just happened was rigged. https://t.co/HqmpvjJQeJ