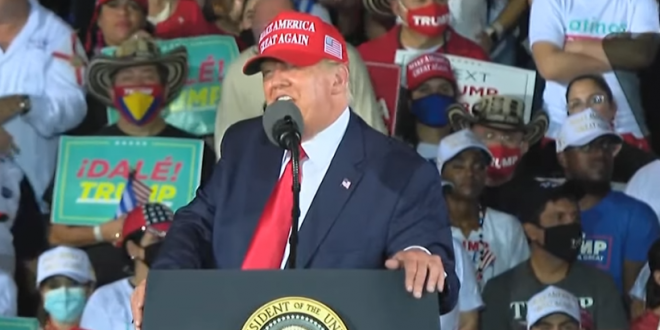 Trump Says He’ll Fire Fauci “A Little After The Election”

All pretense of Donald Trump getting along with Dr. Anthony Fauci, who has advised six presidents in his nearly four decade tenure as head of the National Institute of Allergy and Infectious Diseases, is gone after the president hinted that he may fire the long-serving official after the November 3 election at a rally Sunday.

At a packed Florida rally late Sunday night, the president’s fifth in as many states that day, Trump told supporters chanting “fire Fauci” to “wait until a little bit after the election,” hinting that he would soon fire the long-serving official.

Trump continued, telling the crowd, many of whom were not wearing masks, that Fauci is a “nice guy but he’s been wrong a lot.”

At his fifth rally yesterday, a “Fire Fauci” chant broke out while President Trump was saying we hear too much about Covid-19. “Don’t tell anybody, but let me wait until a little bit after the election. I appreciate the advice,” Trump told the crowd.

Crowd chants “Fire Fauci” during Pres. Trump’s campaign rally in South Florida: “Don’t tell anybody, but let me wait until a little a bit after the election,” the president says in response. “I appreciate the advice.” https://t.co/rlgU1dKT2A pic.twitter.com/Mqa2RwbP3i

WATCH: A “fire Fauci” chant erupted at a Trump rally in Florida, with the POTUS saying he’d “wait until a little after the election.”

Also, while Trump might want to fire Fauci, worth noting he technically can’t. https://t.co/W7f5DFRsSm