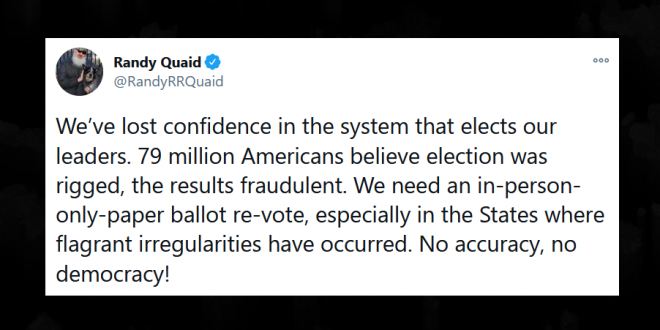 Randy Quaid, an actor best known for playing unhinged characters like Cousin Eddie in the Vacation movies and an alcoholic pilot in Independence Day, is plenty, let’s say, “eccentric” in real life, too. There was the time he released a sex tape with his wife Evi where she wears a Rupert Murdoch mask, and when they sought asylum in Canada because they feared “Hollywood star whackers” were after them. In recent years, the one-time Academy Award nominee has taken his nuttiness to Twitter, where he caught the eye of none other than — guess who! — the President of the United States.

Everything below was retweeted by Trump today.

So are any mainstream media organizations doing an in-depth investigation of Dominion?

Thank you Randy, working hard to clean up the stench of the 2020 Election Hoax! https://t.co/I1hgtxe486

Are you listening Republicans? https://t.co/N5heB6gvwb

TIME TO MAKE OAN & NEWSMAX RICH. FOX IS DEAD TO ME! pic.twitter.com/IhnDXCJ7a7

Do not read this affidavit from an IT expert. We know what is documented here is impossible as the Maricopa County Supervisors told us everything is fine and go back to sleep and pay your taxes and wear a mask. And leftist reporters told us to move on. https://t.co/M7J9IZ1cfk

“In Wisconsin, somebody has to be indefinitely confined in order to vote absentee. In the past there were 20,000 people. This past election there were 120,000…and Republicans were locked out of the vote counting process.” @VicToensing @newsmax