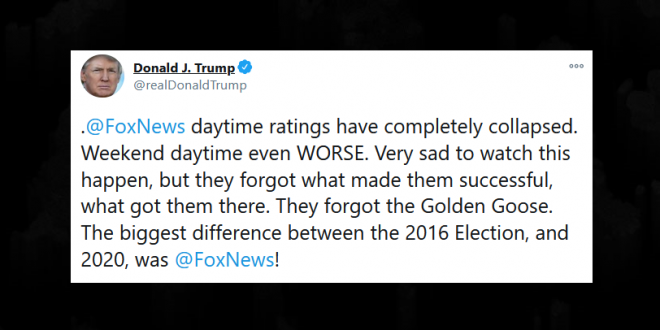 President Trump on Thursday unleashed on Fox News, retweeting a dozen messages attacking the network and sharing one himself lamenting that Fox “forgot the Golden Goose” that made them successful.

The president also retweeted a dozen different accounts that promoted conservative networks as alternatives to Fox News. Most of those accounts had very few followers and had tweeted only a handful of times.

“Quite right. They’ve been a disaster since the election day. DT has not been given any chance by a clearly corrupt media,” read one tweet that Trump shared.

.@FoxNews daytime ratings have completely collapsed. Weekend daytime even WORSE. Very sad to watch this happen, but they forgot what made them successful, what got them there. They forgot the Golden Goose. The biggest difference between the 2016 Election, and 2020, was @FoxNews!