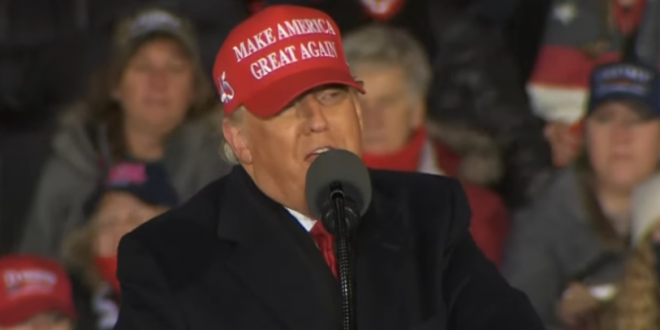 Moments after showing the crowd a compilation of Joe Biden’s gaffes at his Michigan rally, Donald Trump called the rapper Lil Pump “Little Pimp” as he invited him on to the stage.

In his last rally for the 2020 elections at Grand Rapids, Michigan, on Monday night Mr Trump called the rapper on stage in front of the cheering crowd, and identified him as “one of the big superstars of the world”.

Lil Pump, who was nominated for best new artist at the VMAs in 2018 and whose breakthrough came with the 2017 hit “Gucci Gang”, has previously said he is going to “move the fuck out” of the US and go “to Colombia” if Mr Trump doesn’t win the election.

“I love your sound. I love your music” — Trump shouts out Ted Nugent, who threatened to kill Barack Obama and Hillary Clinton pic.twitter.com/rjjhOizsB2

Trump claims that if Biden is elected, it’ll result in “no school, no graduations, no weddings, no Thanksgiving, no Easters, no Christmas, no Fourth of July, no future for the youth.” It’s like a parody of a lunatic political campaign. pic.twitter.com/xAajF65PYy