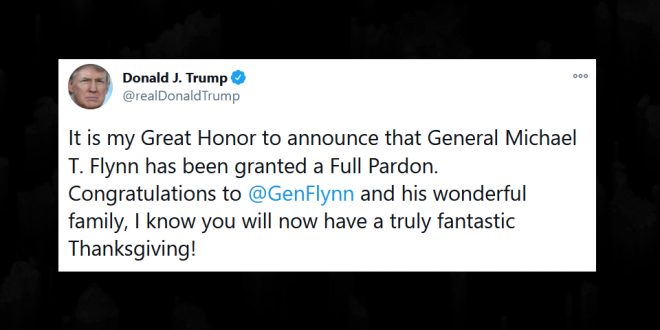 President Trump has pardoned his first national security adviser Michael Flynn, who spent years enmeshed in an often bizarre legal war with the government that sprung from the Russia investigation.

The pardon brings an end to a long-running legal odyssey for Flynn, who was the only member of the Trump administration to be charged as part of special counsel Robert Mueller’s Russia investigation.

Flynn pleaded guilty in 2017 to lying to the FBI about his contacts with the Russian ambassador, and then cooperated extensively with prosecutors. But he ultimately reversed course and accused the government of trying to frame him.

It is my Great Honor to announce that General Michael T. Flynn has been granted a Full Pardon. Congratulations to @GenFlynn and his wonderful family, I know you will now have a truly fantastic Thanksgiving!