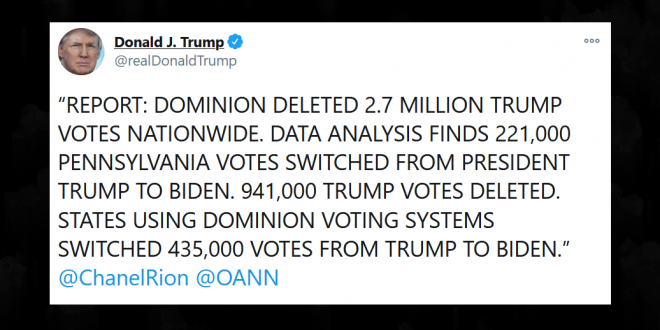 Dominion Voting Systems, which makes software that local governments around the nation use to help run their elections, is now at the center of baseless claims that “software glitches” led to mistakes in vote tallies in Michigan and Georgia last week. The Dominion software was used in only two of the five counties that had problems in Michigan and Georgia, and in every instance there was a detailed explanation for what had happened. In all of the cases, software did not affect the vote counts.

Right-wing voices across the internet this week have claimed incorrectly that Dominion was responsible for mistakes in vote counts, and President Donald Trump shared a Breitbart article on Twitter that incorrectly tied the Michigan issues to separate problems in Georgia. The president tweeted about Dominion on Thursday morning, which Twitter quickly flagged as “disputed.” Trump tagged far-right-wing One America News Network, an outlet highly sympathetic to Trump, in the tweet.