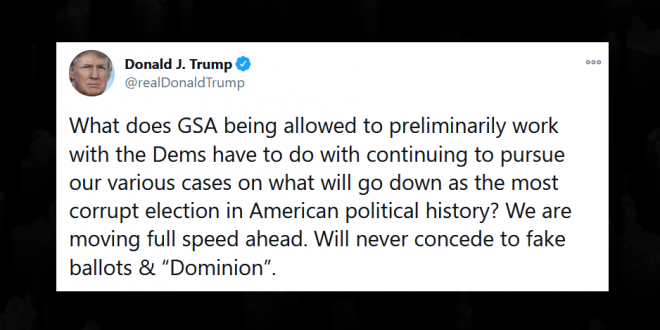 Trump: I Will “Never Concede To Fake Ballots”

Having come closer than ever to accepting the 2020 election results on Monday night, by officially launching the transition process, Donald Trump again took to Twitter in the small hours of Tuesday to insist that he “will never concede”.

The president reiterated his unsubstantiated claims that the 3 November vote had been “the most corrupt election”, saying he will keep challenging the result in court and hitting out at “fake ballots and ‘Dominion’” – a reference to a brand of voting machines.

What does GSA being allowed to preliminarily work with the Dems have to do with continuing to pursue our various cases on what will go down as the most corrupt election in American political history? We are moving full speed ahead. Will never concede to fake ballots & “Dominion”.