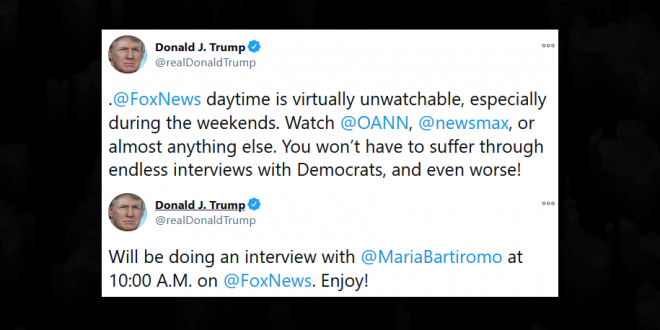 Trump: Fox Is Virtually Unwatchable, Watch Me On Fox

President Donald Trump has called Fox News “unwatchable” and urged his followers to watch more conservative outlets as his relationship with the network grows increasingly tense in the aftermath of the election.

The tweet came hours before Trump was scheduled to appear in an interview with Fox News host Maria Bartiromo later Sunday in his first interview since the presidential election.

Newsmax amplified Trump’s message in a reply to his tweet, directing people to its platform and billing itself as a “great choice for your weekend news.” Meanwhile, Fox News is trying to protect its viewership by asking live TV guests to avoid appearing on its emerging rival, Newsmax.

.@FoxNews daytime is virtually unwatchable, especially during the weekends. Watch @OANN, @newsmax, or almost anything else. You won’t have to suffer through endless interviews with Democrats, and even worse!

Will be doing an interview with @MariaBartiromo at 10:00 A.M. on @FoxNews. Enjoy!