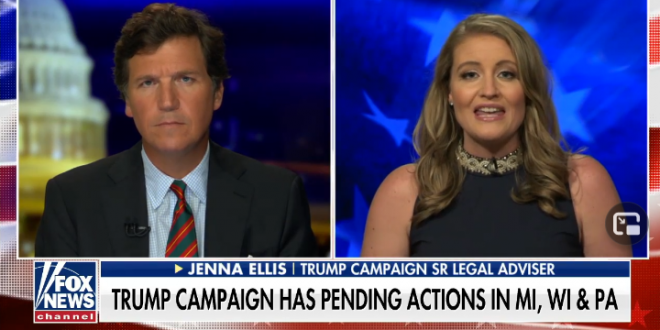 Trump campaign legal adviser Jenna Ellis appeared on the Tucker Carlson’s Fox News show Wednesday night. In the segment, she pushed a false story that went viral early Tuesday and ended up on President Donald Trump’s Twitter feed before it was eventually debunked.

The false story gained traction, in large part, thanks to a tweet by conservative commentator Matt Mackowiak, who screenshotted a page from election data company Decision Desk HQ that appeared to show Joe Biden receiving 100% of a newly counted batch of votes.

But the screenshot was not evidence of “found votes,” or voter fraud, or Democrats trying to steal the election. It was a typo by Decision Desk HQ. After the story was debunked, Mackowiak deleted his tweet, noting “This tweet was taken and share honestly. I have now learned the MI update referenced was a typo in one county.”

As you’ll see in the video, Carlson made no attempt to push back on the debunked claim, in fact asking, “Will those votes count?”

Joe Biden said today in his press conference that he wants “every vote to count.” The Constitution requires every LEGAL, LEGITIMATE vote to count. Make no mistake — Democrats want fraud to count. That’s not our system. @TeamTrump is fighting to protect election integrity. pic.twitter.com/nS9fJzKtyr

Trump Legal Adviser Jenna Ellis Discusses Magical 138,000 Michigan Biden Votes that Appeared Out of Nowhere in the Middle of the Night (VIDEO) via @gatewaypundit https://t.co/wODXZZFZDH