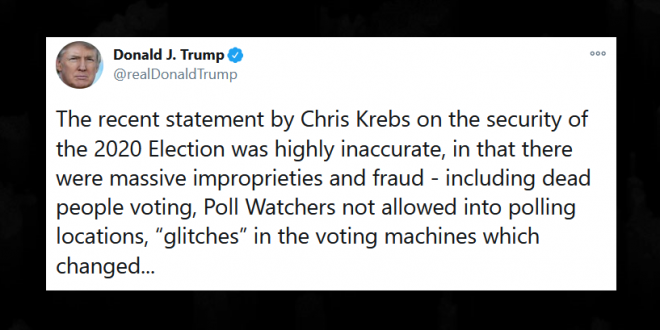 The Department of Homeland Security’s cyber chief, who presided over an elaborate election security effort guarding against foreign interference and fraud, was ousted by President Donald Trump on Tuesday as part of a continuing post-election purge of top national security officials.

Trump announced the dismissal in a tweet Tuesday night. The dismissal of Christopher Krebs, director DHS’s Cybersecurity and Infrastructure Security Agency, follows the agency’s declaration that the general election was the most secure in U.S. history.

The statement served as a pointed rebuke to the president who continues to make unsubstantiated allegations of voting fraud while Trump’s legal team pursues multiple legal challenges in battleground states.

The recent statement by Chris Krebs on the security of the 2020 Election was highly inaccurate, in that there were massive improprieties and fraud – including dead people voting, Poll Watchers not allowed into polling locations, “glitches” in the voting machines which changed…

…votes from Trump to Biden, late voting, and many more. Therefore, effective immediately, Chris Krebs has been terminated as Director of the Cybersecurity and Infrastructure Security Agency.

The only thing secure about our 2020 Election was that it was virtually impenetrable by foreign powers. On that, the Trump Administration takes great credit. Unfortunately, the Radical Left Democrats, Dominion, and others, were perhaps more successful!