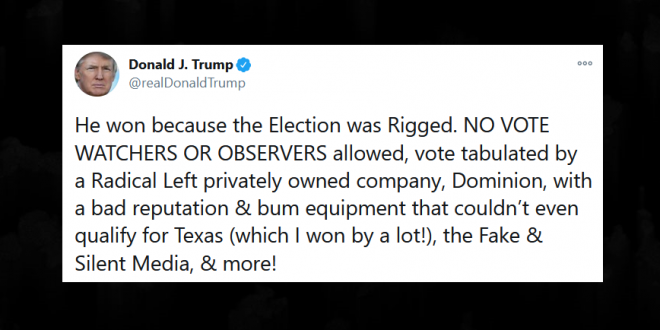 Donald Trump has appeared to concede the US election for the first time, saying that president-elect Joe Biden “won”. He made the admission in a tweet along with more unfounded claims the vote was rigged against him. It is a significant acknowledgement from Mr Trump, who despite losing both the Electoral College and popular vote has refused to follow tradition and accept the result.

He won because the Election was Rigged. NO VOTE WATCHERS OR OBSERVERS allowed, vote tabulated by a Radical Left privately owned company, Dominion, with a bad reputation & bum equipment that couldn’t even qualify for Texas (which I won by a lot!), the Fake & Silent Media, & more! https://t.co/Exb3C1mAPg

Two words: “He won…” Another crack in the president’s veneer of denial over the Biden election outcome. He has taken no questions from the WH press since Election Day. pic.twitter.com/cMyVuZ3vY7

Tomorrow: “I let him win”

Next Week: “I never wanted a second term anyway” pic.twitter.com/rbD6m4Js70

"He won," President Trump says in this tweet today, acknowledging in the most direct way yet the reality that Joe Biden won the election. The rest of the tweet is not true, of course, giving Twitter fact-checkers a real doozy to deal with on a Sunday morning. https://t.co/TSIY7VGjeQ