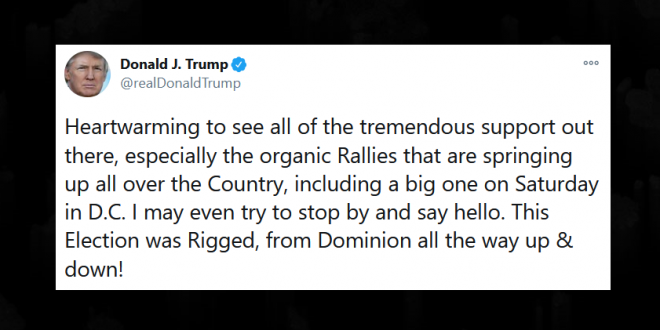 President Donald Trump tweeted Friday alluding to the possibility that he would attend a planned rally in D.C., organized in support of the president and his claims of voter fraud in the 2020 election, in some fashion on Saturday. Activists organizing under the banners of “Million MAGA March” and “Stop the Steal” are expected to be among those protesting and marching in D.C. this weekend.

As reported by Politico:

The disparate tribes of MAGA Nation — Oath Keepers, Three Percenters, Infowars fanatics, Groypers, Proud Boys, white nationalists, neo-Nazis and the people who would simply call themselves die-hard MAGA — have declared that they are simply going to show up in Washington en masse over the weekend to rally together, with the marquee event on Saturday. Notably, organizers have not filed for permits.

Heartwarming to see all of the tremendous support out there, especially the organic Rallies that are springing up all over the Country, including a big one on Saturday in D.C. I may even try to stop by and say hello. This Election was Rigged, from Dominion all the way up & down!

Currently Enrique Tarrio president of the proud boys is organizing a PB rally in DC with Brien James, Brien got his start in the KKK, After the kkk Brien James joined the hammerskins then co-founded the Vinlanders a horrifically violent neo nazi gang https://t.co/qpq113oBQv