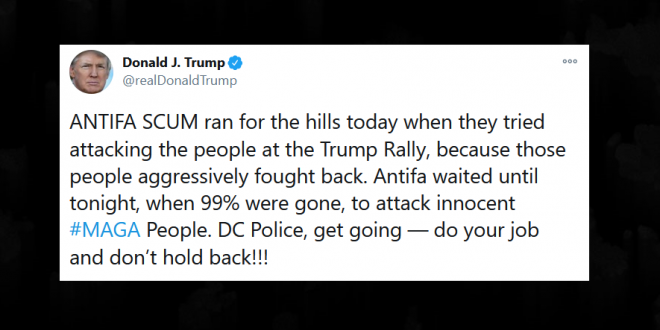 Trump Eggs On Violence By Proud Boys And Police

Violent clashes between supporters of President Donald Trump and counterprotesters erupted in the streets of downtown Washington, D.C., Saturday night after thousands of the president’s supporters rallied earlier in the day to protest election results they say are fraudulent.

One person was stabbed when a fight broke out between two large groups at 10th Street and New York Avenue NW about 8:30 p.m., a spokesperson for D.C. Fire and EMS said. Medics took the person with critical injuries to a trauma center, the spokesperson said.

Police arrested a total of 20 people since demonstrations began midday, and two police officers were injured, D.C. Mayor Muriel Bowser’s office said. The extent of their injuries is unclear at this time.

ANTIFA SCUM ran for the hills today when they tried attacking the people at the Trump Rally, because those people aggressively fought back. Antifa waited until tonight, when 99% were gone, to attack innocent #MAGA People. DC Police, get going — do your job and don’t hold back!!!

Radical Left ANTIFA SCUM was easily rebuffed today by the big D.C. MAGA Rally crowd, only to return at night, after 99% of the crowd had left, to assault elderly people and families. Police got there, but late. Mayor is not doing her job!

Human Radical Left garbage did this. Being arrested now! https://t.co/fXSsXXp5yc

Graphic: A close-up angle of BLM rioters knocking a man unconscious who was leaving the #MillionMAGAMarch in DC earlier today. They also steal his phone when he’s on the ground. Video by @FromKalen. pic.twitter.com/cf7bnkpsCf

Andy conveniently left out the part where this guy picks a fight then assault multiple people before he gets his ass handed to him. https://t.co/jMLsFlWbGq pic.twitter.com/zlXF1BoM9n

At 1m07s you can see a line of men doing Nazi salutes down the middle of the street in our nation’s capital pic.twitter.com/zNT6B2hnLV

Large roving crowd of Trump supporters, Proud Boys among them, are roving around downtown #DC. They’re chanting: “Whose streets? Our streets!” A number came from Harry’s — their go-to bar in town. Police are out in riot gear. #DCprotest pic.twitter.com/NifvQ3Xr1y

Try not to to laugh… pic.twitter.com/4IsqdOKjrA

– A wall of moms and thousands of peaceful protesters get pepper spray, rubber bullets, and batons from cops and thugs

– A crowd of violent terrorist Proud Boys tearing shit up in downtown DC get a wink and a nod from cops because trump.

Previous CHATTER AWAY: Overnight Open Thread
Next Ann Coulter: I’m Glad Trump Lost, Another Term Would Have Killed Us, We Need “Trumpism Without Trump”