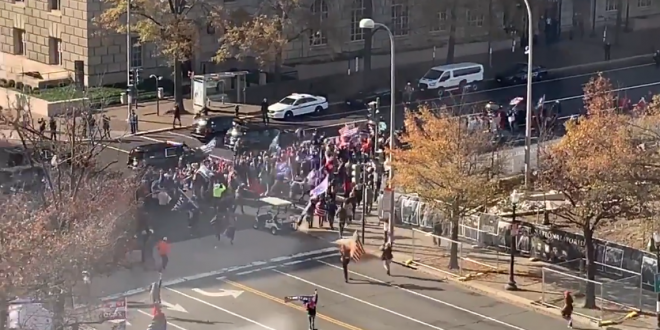 A week after the election was called for Joe Biden, hundreds of President Trump’s supporters descended on the nation’s capital Saturday to falsely claim that the race had been stolen from the man they adore — who soon decided to welcome them in person.

Shortly after 10 a.m., Trump drove down Pennsylvania Avenue in his motorcade, greeting hundreds of cheering protesters who ran to the side of Freedom Plaza and clambered to catch a glimpse. He smiled and waved from a car window as people filled the street to follow behind.

“He drove right past me. I saw him. He waved right past me,” one man said, squatting to collect himself. A group of women huddled around their phone, looking at a video they took of Trump’s appearance. “He looked fake,” one said. “I’m still shaking.”

This is giant. Hundreds of Proud Boys and supporters marching on the streets of DC chanting “FUCK ANTIFA” two hours ahead of the #MillionMAGAMarch. pic.twitter.com/KfZpEq7KYE

A few hundred here at F and 12th, a couple blocks from the rally point. I will begin livestreaming momentarily. pic.twitter.com/LK4cuuiSS1

A few Trump supporters at BLM Plaza have torn down the pro-BLM signs posted on the fence protecting Lafayette Square. pic.twitter.com/VodLuFfmhv

The Proud Boys have started marching in DC pic.twitter.com/DlP7aOBTrI

Dozens of Proud Boys gather for the Million MAGA March in DC. pic.twitter.com/JekvxqoOkV