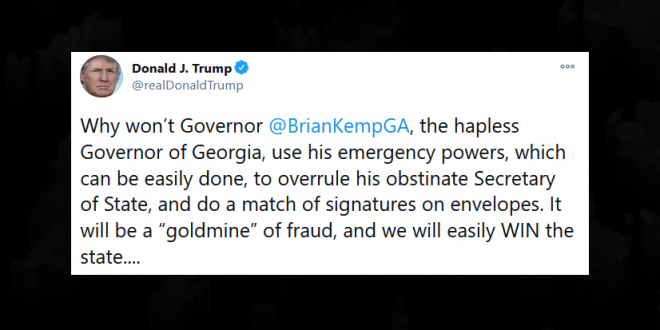 On Monday, Georgia’s Camden County will begin its recount of the presidential race, where Joe Biden narrowly defeated President Donald Trump. Other Georgia counties have already started and that loss is bringing a chaotic political reality for the GOP in the state.

As Trump continues to mount legal battles to his loss in Georgia and other swing states, he made a strong statement against Georgia’s Republican Governor Brian Kemp on Fox News. “The Governor’s done nothing,” Trump said of Kemp. “He’s done absolutely nothing. I’m ashamed that I endorsed him.”

Which brings us to this morning.

Why won’t Governor @BrianKempGA, the hapless Governor of Georgia, use his emergency powers, which can be easily done, to overrule his obstinate Secretary of State, and do a match of signatures on envelopes. It will be a “goldmine” of fraud, and we will easily WIN the state….