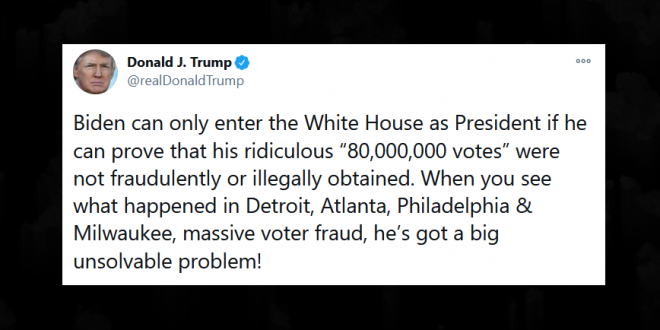 Trump Claims Biden Has To Prove He Got 80M Votes

On Friday, he backtracked on the pledge and appended a number of additional conditions that Mr Biden would have to meet to ensure the president’s peaceful exit from the White House. Mr Trump’s tweet repeated unsubstantiated claims about voter fraud.

First of all, this is not how general elections work. No candidate needs to prove the veracity of state by state election results. It is up to the Secretary of State to approve and certify the election results, which, by design, makes it far more challenging for systemic voter fraud to occur across the nation.

By claiming that Biden needs to prove that every one of his record-tallying votes is in fact true, Trump is either parading his ignorance of a system in place for centuries, or he is willfully misinforming his Twitter audience. Neither of these explanations is terribly charitable to the sitting president (he is either being stupid or lying in this tweet.)

Biden can only enter the White House as President if he can prove that his ridiculous “80,000,000 votes” were not fraudulently or illegally obtained. When you see what happened in Detroit, Atlanta, Philadelphia & Milwaukee, massive voter fraud, he’s got a big unsolvable problem!