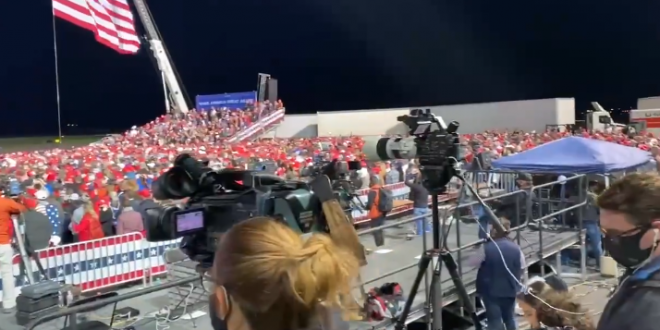 Supporters of President Donald Trump were left stranded overnight after a campaign rally in Georgia ended in chaos. Thousands were bussed into the Richard B. Russell Regional Airport in Rome, leaving their cars in parking lots, but were left waiting for hours after coaches failed to pick them up.

The Georgia rally was Trump’s fourth and penultimate campaign stop of the day, drawing a crowd of up to 30,000. But chaotic scenes unfolded as the rally drew to a close around 10:30 p.m. EST with thousands battling to exit the site and lining the road scrambling to get onto buses.

Hours after the President departed for Florida, this was the scene in Georgia as people were left for hours waiting for buses to take them to their cars: pic.twitter.com/rx34hXSR2U

Some of the folks left stranded were older and disabled. Multiple people tried to hitch rides from strangers amid the pandemic.

The single, narrow road to get in and out of the rally site was shared by pedestrians, cars, busses and emergency vehicles. pic.twitter.com/Fv3hQzVtW6

A chaotic scene where hundreds lined the road a mile up from where President Trump held his rally in Rome, GA — attempting to exit the event.

Some people were sitting and laying on the ground. It’s 46 degrees and windy in the area tonight. pic.twitter.com/AqyAYpZBLA

Also there were people melting down left and right due to the logistical shitshow of leaving the event. Screaming matches between people over who gets to board returning busses, etc. I heard variations of “this is the biggest nightmare…” shouted in frustration several times