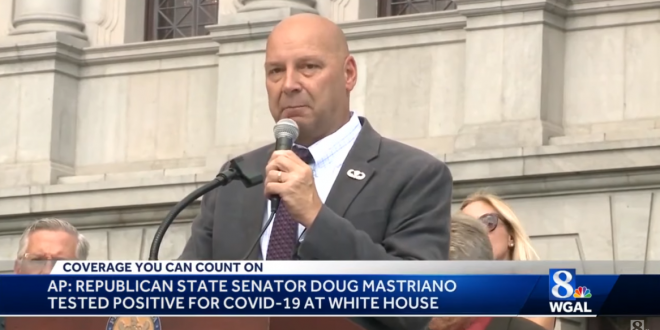 A Pennsylvania state senator abruptly left a West Wing meeting with President Donald Trump after being informed he had tested positive for the coronavirus, a person with direct knowledge of the meeting told The Associated Press on Sunday.

Trump told Mastriano that White House medical personnel would take care of him, his son and his son’s friend, who were also there for the Oval Office meeting and tested positive. The meeting continued after Mastriano and the others left, the person said.

Sen. Mastriano has been an outspoken critic of Gov. Tom Wolf’s mitigation efforts to slow the spread of the coronavirus. Lt. Gov. John Fetterman had the following to say on the matter:

“Even if you don’t care about yourself. If you’re not afraid of the virus you probably have someone in your life that would not do well. or your neighbor or your friends. Everyone has someone that they love who can’t afford to get this virus.”

Representative Malcolm Kenyatta had the following to say on the matter: “The PA House and Senate GOP have consistently put their Democratic colleagues and Capitol staff at risk with their reckless behavior. GOP members have tested positive, and they only tell Republicans. They refuse to wear masks, even in small committee rooms.

Last week Trump retweeted Mastriano’s debunked claim that over a million more Pennsylvanians had voted by mail than had requested mail-in ballots.

Mastriano brought his son and his son’s buddy to a coup meeting with Trump in the Oval Office, and that’s where they found out they all had Covid. Mindbending.

LMAO. Karma sure is the b-word for these seditious traitors:

Republican state Sen. Doug Mastriano tests positive AFTER hosting the meeting last week in Gettysburg. He was not wearing a mask. https://t.co/G1M42wVDNz

There is mounting evidence that the PA presidential election was compromised. If this is the case, under Article II, Section 1.2 of the US Constitution, the state legislature has the sole authority to direct the manner of selecting delegates to the Electoral College. (1)

This power was given to the state legislature for the purpose of safeguarding the appointment of our President, specifically contemplating corruption and ensuring that the people are not disenfranchised through a corrupt election process. (2)