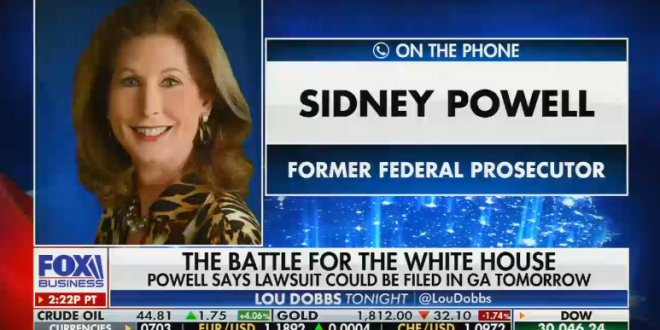 Sidney Kraken Powell: Trump Won In An “Absolute Landslide” And His Presidency “Will Be Saved” [VIDEO]

“All kinds of it are equally blatant. I mean, people sitting on the floor writing on the side of buses filling out ballot after ballot.

“This is no way there was anything but widespread election fraud here. We’ve got one witness that says in Arizona at least there were 35,000 votes added to every Democratic candidate just to start their voting off.

“It’s like getting your $500 of Monopoly money to begin with when you haven’t done anything. And it was only for Democrats.

“There’s no issue in my mind but that he was elected in an absolute landslide nationwide.” – Sidney Kraken Powell, agreeing with Fox Business host Lou Dobbs that “the Trump presidency will be saved.”