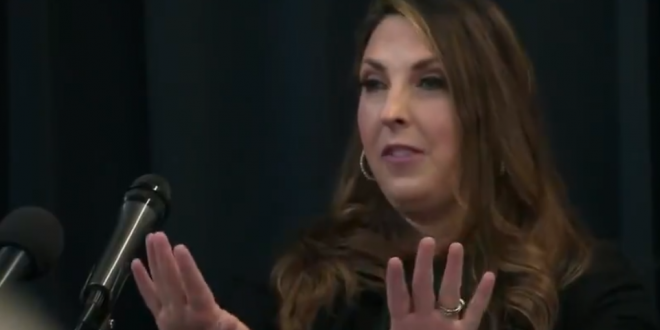 CNN’s Ryan Nobles tweeted video of an exchange between McDaniel and a Georgia voter in which McDaniel first responds to a man alleging vote-switching by saying “We didn’t see that in the audit, so we’ve got to just, that evidence, I haven’t seen. So we’ll also wait and see on that.”

On the ground in Georgia today in support of the GOP Candidates in the #GASen runoff- ⁦@GOPChairwoman⁩ Ronna McDaniel.
McDaniel speaking to a crowd in Marietta. Neither of the two Republicans candidates are here with her.
She promises “I’m gonna be in your state so much.” pic.twitter.com/BAjAv4n9Cp

One person from the crowd yells out as McDaniel was speaking-

(Brian Kemp is the GOP Governor and a committed Trump supporter)

McDaniel is now pleading with the crowd to focus their energy on the Senate race and promises of they will worry about Election fraud issues “later”.

As McDaniel wraps up her remarks she tells the crowd she will tell the President about how fired up the crowd was. The crowd erupts in a “Trump, Trump, Trump” chant.
Remember she was here in support of Perdue and Loeffler.

Afterward- I asked @GOPChairwoman if the President’s consistent attacking of the election process could endanger voter turnout and hurt the GOP in the runoff.
She argued the passion for Trump will translate to Perdue and Loeffler.

Here is video from one of the exchanges. A supporter asks why the RNC is not looking into the allegations with the voting machines. McDaniel stated flatly there is no evidence of that.
Then someone asks why they should vote in this election when it’s “already decided”. pic.twitter.com/gzDXB7OfEK