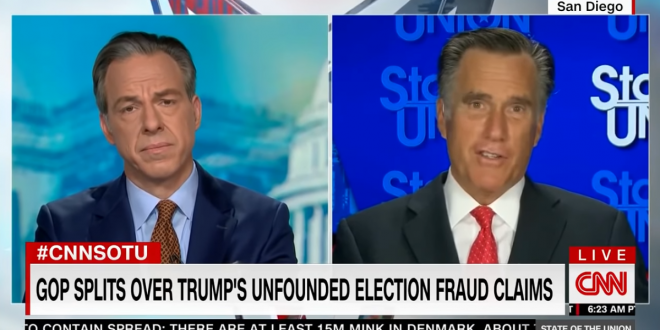 Sen. Mitt Romney (R-Utah) said Sunday that the U.S. shouldn’t “expect” President Trump “to go off quietly in the night” after Trump has spent the days after the election spreading false claims about victory and questioning the integrity of mail-in ballots.

Romney told CNN’s “State of the Union” that Trump will “keep on fighting until the very end” over the election results after President-elect Joe Biden was projected the winner on Saturday.

“You’re not gonna change the nature of President Trump in these last days, apparently, of his presidency,” he said. “He is who he is. And he has a relatively relaxed relationship with the truth and so he’s gonna keep on fighting until the very end.”

Sen. Mitt Romney on Pres. Trump’s unfounded election fraud claims: “He has a relatively relaxed relationship with the truth. … I’m convinced that once all remedies have been exhausted, if those are exhausted in a way that’s not favorable to him, he will accept the inevitable” pic.twitter.com/waICSUpiKD