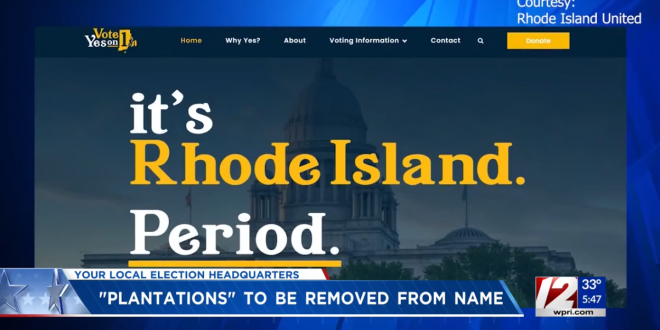 A statewide referendum that would shorten Rhode Island’s official name was approved by voters on Election Day. With 100-percent of precincts reporting, nearly 53-percent of voters approved a ballot question to remove Providence Plantations from its name.

Advocates say the word plantation evokes images of slavery in the state. Opponents argued that the word instead is a reference to colonies with agricultural economies.

A previous vote to change the name failed in 2010.

Rhode Island was incorporated as The State of Rhode Island and Providence Plantations when it declared statehood in 1790.

In behalf of our entire team, we sincerely thank all of the volunteers and supporters who helped get the word out. We overcame a nearly impossible margin (80-20 in 2010) and made history together!