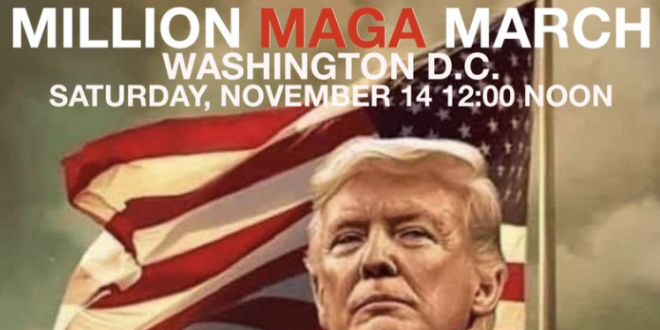 The disparate tribes of MAGA Nation — Oath Keepers, Three Percenters, Infowars fanatics, Groypers, Proud Boys, white nationalists, neo-Nazis and the people who would simply call themselves die-hard MAGA — have declared that they are simply going to show up in Washington en masse over the weekend to rally together, with the marquee event on Saturday.

The groups have assigned the gathering different names: the Million MAGA March, the March for Trump, Stop the Steal DC. But they’re all set to take place Saturday in the nation’s capital, around noon, with most set to congregate near Freedom Plaza though some groups have also suggested the Supreme Court building down the National Mall.

At least three pro-Trump rallies are planned for Freedom Park in DC this Saturday. There’s just one possible hitch: None of them appear to have filed the paperwork for a permit.

No groups with the name “Million MAGA March,” “Stop the Steal,” or “March for Trump” have applied to host a rally at Freedom Park this weekend, says NPS spokesperson Mike Litterst.

The only application the Park Service has received is for a “Freedom of speech rally” from an entity called “Cindy Chafian Women for America First.”

During a Tuesday morning news conference at a D.C. park opening, Mayor Muriel Bowser was asked about the expected rallies. “We continue to follow those activities and be prepared for those activities,” said Bowser.

“Our police chief will have a similar posture this weekend as he did last week and we will be there to support peaceful exercise of first amendment demonstrations.”

Mayor Bower said that the upcoming rallies in the city do not change her recommendations that business owners take down their plywood and boards initially put up following election worries.

Among the organizers is homocon Scott Presler.

Look forward to seeing you all this Saturday, November 14th,

at the Freedom Plaza in DC. #StopTheSteal pic.twitter.com/UIP9EWrEMh

The Official #MillionMagaMarch will be on Saturday, November 14, Freedom Plaza — The #MarchForTrump will march towards SCOTUS against a fraudulent election process. Help us #StopTheSteal and stand up for the President of the united States Donald J Trump pic.twitter.com/SGlqmO4iLj

CALLING ALL PATRIOTS IT IS MAGA NIGHT AT THE WHITE HOUSE

I will be attending the Million MAGA March next Saturday! Join me there. pic.twitter.com/CGkdfn8TZw