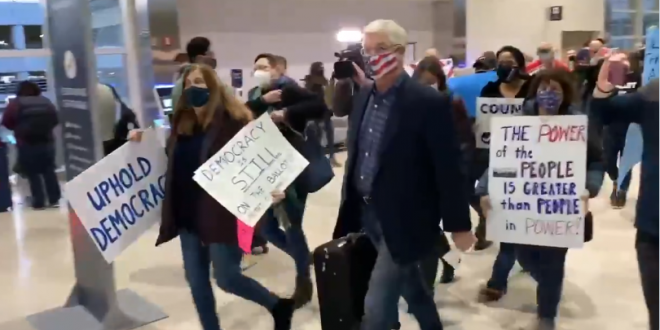 By now, what President Donald Trump is doing is so clear that pretty much every credible newspaper is calling it for what it is: an attempted coup. In Michigan, Republican Senate Majority leader Mike Shirkey left on Friday morning to meet with Trump at the White House.

A reporter and a group of protesters caught Shirkey at Detroit Metropolitan Wayne County Airport, where the senator was evasive. In fact, he has not released a statement about why exactly he is meeting with the President.

Whether Shirkey actually commits to anything is another story. On Tuesday, Shirkey told Bridge that he would not subvert Michigan’s popular vote by selecting his own electors for Michigan’s Electoral College vote, a legally dubious gambit that Trump’s lawyers have seized upon.

#BREAKING On his way to Washington to talk to @realDonaldTrump @SenMikeShirkey says he is “ happy to meet with the president” – but did not give specifics. @WWJ950 @FOX2News #ElectionResults2020 pic.twitter.com/TW0mH5Ttks