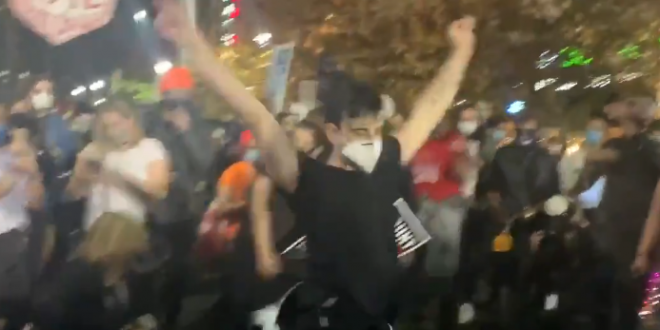 But even she imagined that the scene outside of the Pennsylvania Convention Center, pitting flag-waving Trump supporters against a sea of progressive activists, would be a “more tense protest.” Instead, what she and dozens of reporters and activists found was more akin to a family reunion or block party, complete with music and dancing.

“Philly people know how to party,” she told me. “We do this work because we care about each other, we care about our communities. It just makes sense for us to bring radical joy and love into everything that we do.”

Trump supporters are behind a barricade outside the Pennsylvania Convention Center in Philadelphia. Some heated arguing, loud chanting, and a lot of dancing pic.twitter.com/Q8ysXK85YN

The difference between the two groups protesting right now in Philly is…stark. pic.twitter.com/04h9vui98h

Previous Wohl And Burkman Bound Over For MI Felony Trial
Next GA Secretary Of State: There Will Be Recount [VIDEO]