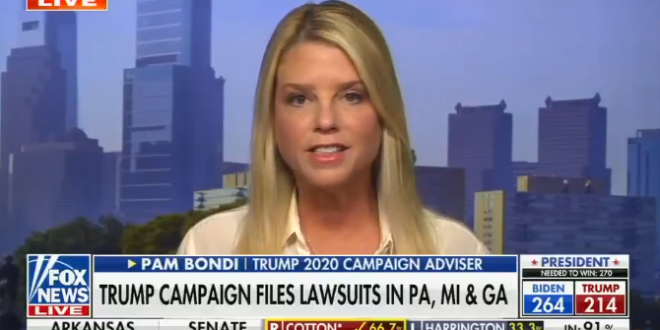 “For every vote that came in late, that was postmarked late…that discounts every legal vote that come in,” Bondi said. “That means all the good residents who are all supporting us in Pennsylvania, their votes don’t count by these fake ballots that are coming in late. And they are not letting us watch the process.”

Steve Doocy asked Bondi to clarify her “fake ballots” comment, to which, she responded “There could be. That’s the problem.” This prompted Doocy to follow up and ask “do you have any — have you heard stories of ballots that are fake?”

Instead of describing those “fake ballots,” Bondi diverted to claims about ballots that were dumped or sent to dead people. When asked if any vote counters have actually said they’ve seen ballots postmarked for after November 3rd, Bondi declined a direct answer to the question before saying “why won’t they let us watch?”

At least host Steve Doocy appeared to be startled and attempted to push back on her lies. Watch the clip. Bondi, not incidentally, now works as a registered foreign agent for Qatar.

On Fox & Friends, Pam Bondi warns about “fake ballots” in Pennsylvania. When pressed on it, Bondi just says “there could be” some, and mentions a bunch of stuff that is not “fake ballots.” pic.twitter.com/1G1Anlhciw