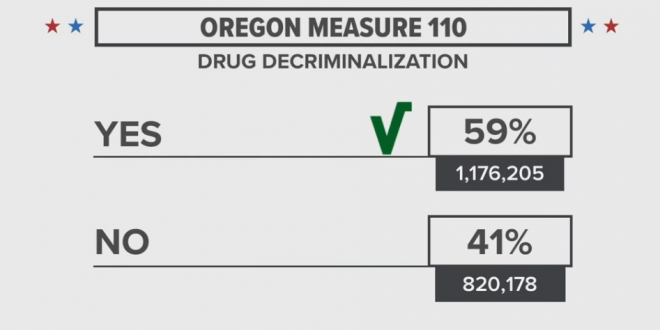 Fifty years after the War On Drugs began in the 1970s, Oregon voters decided on an alternative path: decriminalization for user-amounts of illicit substances and accompanying recovery treatment options instead of jail time.

Oregonians have approved Measure 110, which decriminalizes possession of small amounts of heroin, cocaine, LSD, oxycodone and some other drugs, according to the Associated Press.

The approved measure makes Oregon the first state in the nation to decriminalize hard drugs, along with the legalization of therapeutic use of psilocybin mushrooms.

Oregon just decriminalized drug possession in small amounts. The move marks a change from the so-called war on drugs to focusing on drug addiction and treatment. pic.twitter.com/VRNEcU1FjM