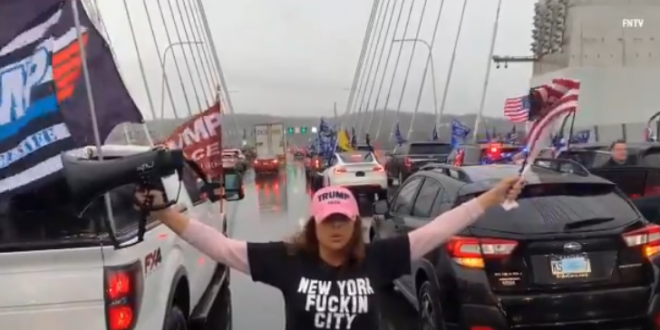 The NYC convoy was accompanied by an NYPD escort, which did not intervene as participants halted traffic on the Whitestone Bridge to wave pro-Trump and pro-police flags in the roadway. The group continued upstate, later taking over the Mario Cuomo Bridge, according to video posted by Freedom News TV.

Christopher Wright, a 36-year-old Black Trump supporter associated with the Proud Boys, told Gothamist that the New York group was planning to drive into Manhattan until they were advised against it by the NYPD.

“Police reached out to us and said, ‘Hey, there’s gonna be a lot of Antifa and Black Lives Matter there. We don’t recommend you guys go there because we don’t know if we have enough backup to fully support you,'” Wright told Gothamist. “So what we did was, we changed the spot at the last moment.”

As you’ll see at the link and do read it, the NYPD did much more to aid the Trump cultists.

Most license plates obstructed at #MAGAdrag. Asked Ofc Lambros if that was legal. He replied “we’re not here for enforcement” In a crosswalk at a red light I took a pic. Truck drove into me. I was then thrown aside by two cops who threatened arrest. @NYPD100Pct why is this okay? pic.twitter.com/081hldltoM