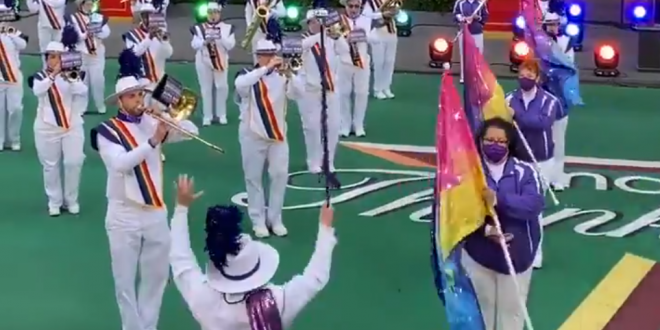 The Lesbian & Gay Big Apple Corps, one of the first queer marching bands in the United States, was founded in 1979 in New York City, a decade after the Stonewall uprising. This year, the Big Apple Corps reached what Marita Begley, the group’s director, called “the mountaintop”: Today it became the first openly LGBTQ group to perform in the Macy’s Thanksgiving Day Parade.

The band had to get creative in order to rehearse safely and legally this fall. Practicing indoors was out of the question, so its usual space in a Manhattan parish center would have to be traded for something without walls. The band needed daylight, so rehearsals would be limited to weekends. They soon settled on a parking lot in the Newark suburbs, between a soccer stadium and a PATH station.

Read the full article. In addition to this tribute to the canceled NYC Pride Parade, today’s Macy’s parade also featured tributes to other beloved Gotham events that did not take place in 2020, such as Coney Island’s Mermaid Parade.

Thank you @Macys for this incredible experience! https://t.co/uQB8GXS34r

The Lesbian & Gay Big Apple Corps was one of the first queer marching bands in the U.S. This year, @rachgutman writes, the group will reach the “mountaintop”: playing at the Macy’s Thanksgiving Day Parade. The photographer Dina Litovsky joined rehearsal: https://t.co/2ZtMcqVgT1

Love that @Macys incorporated elements of all the annual NYC parades that were cancelled into the Thanksgiving Day parade.