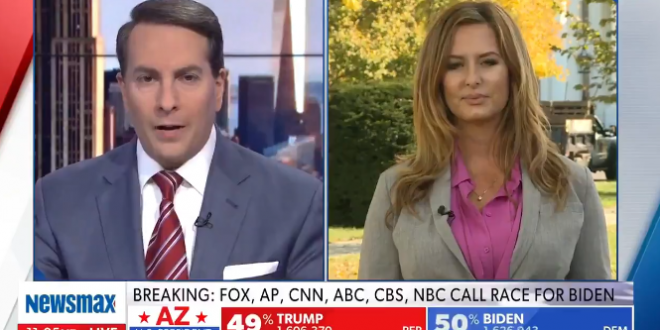 Newsmax Host: Democrats Colluded With The Media To Time Their Election Call To Ruin Trump’s Round Of Golf

“The timing on of all this, Emerald, certainly fascinates me. We talk a lot about media collusion with the Democratic Party and here we have the president just leaving the White House to go to his golf course to play a round of golf and he deserves to be able to do that.

“We have the press conference that Rudy Giuliani is going to hold in Philadelphia happening. And at the very same time, all of all sudden, all of the networks, with the exception of Newsmax, decide that this is the time that they’re going to call the election.

“We are, here at Newmax, are not calling the election.” – Some cultist Newsmax host, floating a claim that will surely end up in the fever brains of QAnon nutbags and other batshit Trump cultists.

Newsmax anchor floats a conspiracy theory that the election was called to ruin Trump’s round of golf pic.twitter.com/q8dGEk22MV