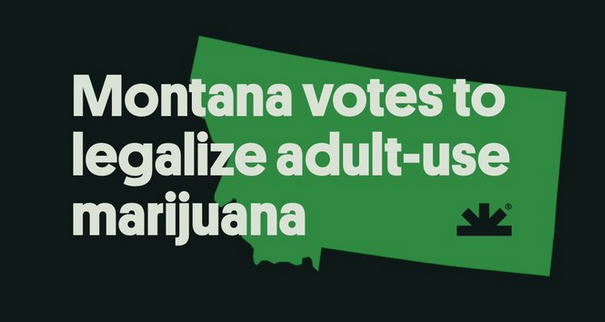 Montana voters have approved a pair of marijuana legalization initiatives. The main statutory reform measure will establish a legal system of marijuana production and sales for adults in the state, while a separate constitutional amendment will stipulate that only those 21 and older can participate in the market.

Opponents of the legalization attempted to quash the proposal with a lawsuit just before Election Day. However, the state Supreme Court rejected a request to block the initiative. The case argued that the measure violates the state Constitution by appropriating funds to specific programs.

Under the proposal, half of the public revenue generated from marijuana sales will go toward environmental conservation programs—a provision that earned the campaign key endorsements last month.

Voters in Montana have passed Initiative 190, which allows for the use, production and sale of marijuana by adults. Voters additionally passed Constitutional Initiative 118, which limits marijuana use to those ages 21 or older. #NORML https://t.co/yFReTysUSE pic.twitter.com/rtABgxvIrH