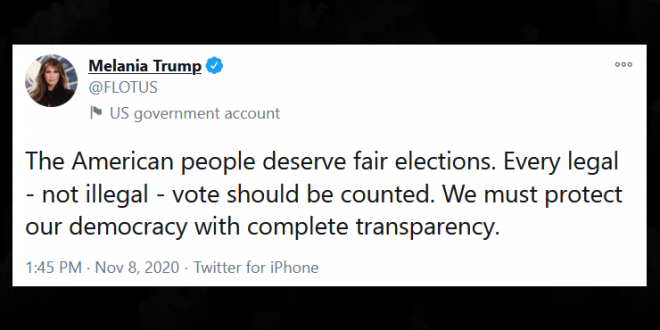 Melania Trump: “Illegal Votes Should Not Be Counted”

First lady Melania Trump offered her first remarks on the election since Joe Biden and Kamala Harris were projected the winners, calling for all ballots cast legally to be counted.

Election officials have reported few if any ballot irregularities, and the president’s legal team has not produced evidence of widespread fraud, despite his allies’ continued public pronouncements.

Her statement comes after CNN reported on Sunday that the first lady had advised the president to accept he had lost, which CBS News has not confirmed. Trump campaign officials quickly disputed the report, saying it was false.

The American people deserve fair elections. Every legal – not illegal – vote should be counted. We must protect our democracy with complete transparency.