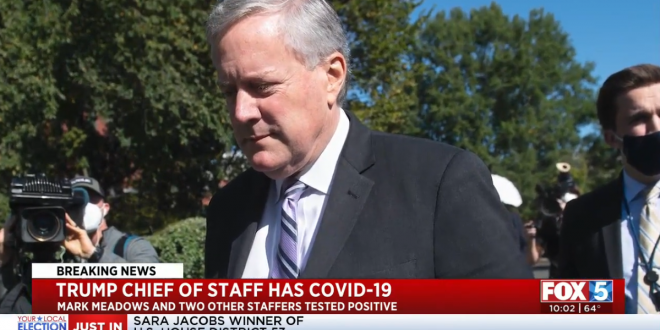 Meadows was with Trump on his final two-day, seven state, 10 rally campaign swing where he was spotted at the events without wearing a face mask. On that trip, Meadows had close contact with members of the Trump family who have not been diagnosed with COVID – including Jared Kushner and Ivanka Trump.

Additionally, Meadows was at the White House on election night where he attended a party in the East Wing filled with prominent Trump supporters, including the president’s personal lawyer Rudy Giuliani, 76.

Organizers said that everyone would be tested for COVID-19 on entry. Earlier on Tuesday, Meadows joined Trump at the campaign headquarters in Arlington, Virginia, and was again not wearing a mask. On Thursday he was in the White House.

As The Daily Beast has reported, Meadows has aggressively shunned masks and has mocked others for taking precautions in the midst of a pandemic that has killed more than 230,000 Americans.

“You guys, with all your masks… You look very different than you used to,” he snarked at reporters trying to ask him questions as he walked—maskless—indoors with Jared Kushner in June.

When COVID-19 broke out in Vice President Mike Pence’s office last month, Meadows reportedly tried to keep it secret. Pressed about that, he tried to justify it by saying that he did not believe “sharing personal information is something we should do.”

NEWS: Along with Trump chief of staff Mark Meadows, at least FOUR other White House aides currently have coronavirus, per sources.

Pains were taken to keep Meadows’ illness a secret, I’m told. And people around him who knew were told to keep quiet.

NEW: I’m told that Mark Meadows, who rarely wears a face mask, was not wearing a face mask in the White House Residence on Election Night.

NEW: I’m told that Mark Meadows and the White House went to great lengths to keep his diagnosis a secret. This is despite alleged contact tracing efforts. My source says: “It’s fucked up.”

NEW: I’m told that even senior White House staffers who had direct contact with Mark Meadows this week learned about his coronavirus diagnosis when the media reported it.