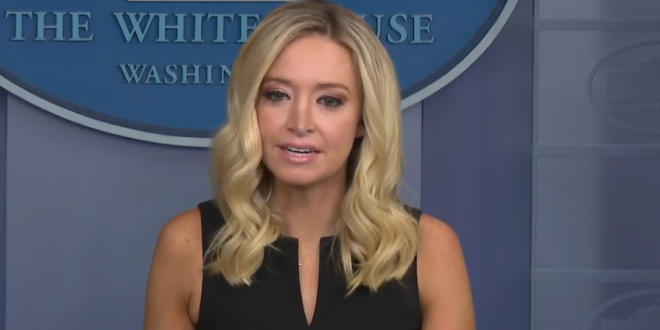 McEnany Predicts “Landslide” For Trump: “FL Is A Lock”

Kayleigh McEnany told Fox News early Tuesday that the Trump campaign “believes that tonight will be a landslide” and that President Trump will win the states of Nevada and Minnesota, two states where Democrat Joe Biden has had a solid lead.

“Our campaign believes that tonight will be a landslide,” the White House press secretary told Fox & Friends after calling Ohio and Florida “a lock” for the president.

“We believe this will be a landslide and for the Biden campaign to come out and double down on Hillary Clinton’s egregious statement that no circumstance should you concede just tells you all you need to know,” she said.

Kayleigh McEnany, the WH Press Secretary who is appearing on Fox also as a Trump campaign adviser, says “Our campaign believes tonight will be a land slide.” She adds that she believes Ohio and FL are a “lock.”

“Our campaign believes that tonight will be a landslide,” Kayleigh McEnany, appearing as both White House press secretary and Trump 2020 campaign adviser, says on Fox News. “We left it all on the field.”

Kayleigh McEnany has suddenly been appearing from the Trump campaign HQ on TV as both a White House press secretary and a campaign senior adviser, encapsulating the ignoring of the Hatch Act and total blurring of lines in the administration https://t.co/JMZ2azIRvF

Previous Televangelist: God Will “Put His Finger” On Trump And Will Punish Any Voters For Joe “Child Sacrifice” Biden
Next Top PA Official: We Alone Will Declare Our Winner