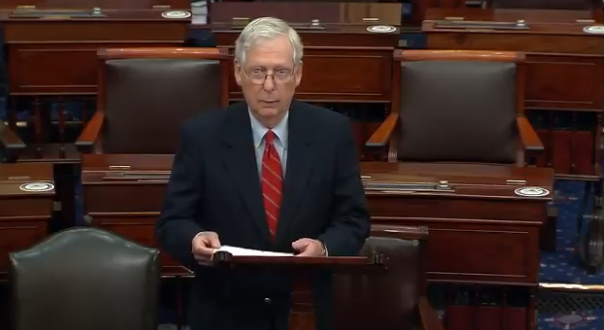 McConnell: Trump Is Right To Look Into “Irregularities”

Senate Majority Leader Mitch McConnell on Monday said President Donald Trump was completely within his rights to look into “irregularities” from last week’s election. In a speech on the Senate floor, the Republican leader did not acknowledge Democrat Joe Biden as president-elect or Kamala Harris as vice president-elect.

“President Trump is 100 percent within his rights to look into allegations of irregularities and weigh his legal options,” McConnell said.

McConnell acknowledges that the election led victories to GOP senators and House members. But for presidential race, he says “no states have yet certified their election results” and Pres. Trump is “100% within his rights” to weigh legal options. He makes no mention of Joe Biden pic.twitter.com/X8rZUXVaOA

MITCH MCCONNELL: “Trump is 100% within his rights to look into allegations of irregularities and weigh his legal options…no lectures about how [he] should…accept preliminary election results from the same characters who just spent 4 years refusing to accept…the last election.” pic.twitter.com/rZWGovF5OE