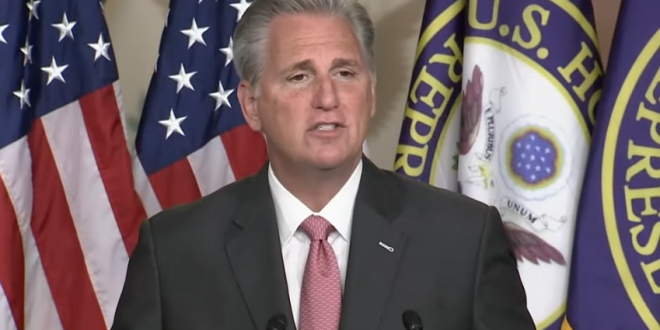 McCarthy: No Briefings For Biden, Trump Can Still Win

The top Republican in the House on Thursday stood firm in not accepting President-elect Joe Biden’s victory, speculated that recounts could turn the tide of President Donald Trump’s loss and welcomed new lawmakers into his conference who have given credence to the QAnon conspiracy theory.

At his weekly press conference, Minority Leader Kevin McCarthy of California cast doubt on the results of the presidential election and said Biden need not receive classified intelligence briefings from the Trump administration until his scheduled inauguration on Jan. 20.

McCarthy is a staunch ally of Trump and held out hope that the election results could be materially changed in the president’s favor, citing a recount by hand in Georgia and a close race in Arizona. “Let’s let all of them carry out. And yeah, some of them could switch.”

Multiple GOP senators including Lindsey Graham, James Lankford, Rob Portman, and Chuck Grassley have said that Biden should get the briefings.

Kevin McCarthy casts doubt on the results of the presidential election and says Joe Biden doesn’t have to receive classified intelligence briefings from the Trump administration until his scheduled inauguration on Jan. 20. https://t.co/0UZSq1mzNf