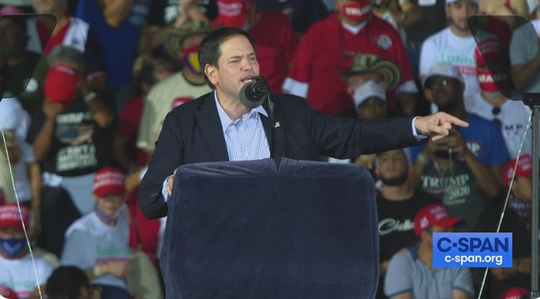 Marco Rubio Cheers Attack On Biden Bus: “We Love It”

President Donald Trump is defending supporters who were seen surrounding a Biden campaign bus in Texas, which led Democrats to cancel an event there and suggested the FBI should stop investigating the incident.

Florida Senator Marco Rubio also announced his support of the incident. “I saw yesterday a video of these people in Texas,” Rubio said at the rally before Trump’s arrival. “Did you see it? All the cars on the road, we love what they did.”

“We love what they did, but here’s the thing they don’t know: We do that in Florida every day. I love seeing the boat parades … We thank all the great patriots…” pic.twitter.com/kRaLcW60jn

Florida Republican Senator Marco Rubio tonight at Trump campaign rally in Opa-locka, FL: “Soon, very soon, we are going to have a vaccine and China’s going to pay for it. Well, they probably won’t pay for it, but the world has seen what they have done.” pic.twitter.com/HmqXh3obZw