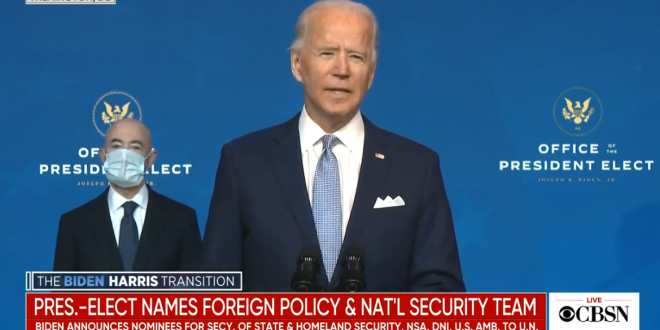 President-elect Joe Biden has taken the podium in Wilmington, Delaware, to announce some of the leading figures of his incoming administration. “It’s a team that will keep our country and our people safe and secure,” he said.

In a prompt and clear rejection of Donald Trump’s retreat from cooperation on the world stage, with his nationalist “America first” approach, Biden said that the US wants to “sit at the head of the table” in international affairs and will “stand up to adversaries” and “not reject our allies”.

Biden unveils the first six members of his national security and foreign policy team, who he said are “a team that reflects the fact that America is back, ready to lead the world, not retreat from it.” pic.twitter.com/huI7Qp4GZ9

.@JoeBiden on Special Envoy for Climate: “For the first time ever, we’ll have a presidential envoy on climate … The world will know that with one of my closest friends, @JohnKerry, he is speaking for America on one of the most pressing threats of our time.” pic.twitter.com/8J9dHRsdDa

Alejandro Mayorkas, President-elect Joe Biden’s choice to lead DHS: “My father and mother brought me to this country to escape communism. They cherished our democracy and were intensely proud to become United States citizens, as was I.” pic.twitter.com/tXz4FFy24k

“My late stepfather, Samuel, he was 1 of 900 children in his school in Białystok, Poland, but the only one to survive the Holocaust after four years in concentration camps … that is what America represents to the world.” — Blinken pic.twitter.com/AYSjQwFGSF

President-elect Joe Biden nominates Linda Thomas-Greenfield as U.N. ambassador: “She’ll be Cabinet status, because I wanted to hear her voice on all the major foreign policy discussions we have.” https://t.co/h1dJXOjieE pic.twitter.com/N1BqKdaV6A

Linda Thomas-Greenfield, President-elect Biden's choice to be U.S. Ambassador to the UN: "In my 35 years in the Foreign Service across 4 continents, I put a Cajun spin on it. I called it Gumbo Diplomacy." pic.twitter.com/5uD5liQCUZ