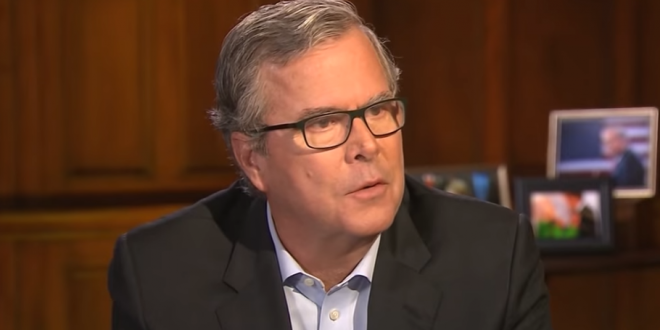 Jeb Bush sparked an uproar on social media late Saturday for calling out the Twitter feed known as Room Rater for supposedly being too “partisan” in its assessments of Zoom and Skype backgrounds during the coronavirus pandemic.

His post was apparently in response to Room Rater giving a Republican strategist only a nine out of 10 for the arrangement of his room during a TV appearance.

Doug Heye, the strategist whose room rating provoked Bush’s ire, appeared to try to calm him down by noting he was actually “happy” to have gotten a nine.

From a September CNN report:

The idea for the lighthearted account, which awards a numeric rating to the settings that appear behind notable names during virtual appearances on cable news and other television programs, started off as a series of funny exchanges between a dating duo separated by an international border during a pandemic.

Claude Taylor, the chair of a left-leaning political action committee called Mad Dog, and his girlfriend Jessie Bahrey, who lives in Vancouver, never intended to become experts in background design. But with almost 300,000 followers and scores of high-profile fans, the influence wielded by the, in Taylor’s words, “fluffy Twitter account” is undeniable.

There has been a dramatic increase in quality since the days Taylor and Bahrey would exchange casual commentary on rooms they’d see while watching cable news. (As someone whose work is “politics adjacent,” Taylor watches a lot of it.) Part of this could be attributed to lessons people have learned from others’ mistakes.

Bush and Room Rater are trending at this writing.

Mr. Room Rater, is it possible now that the election is over to rate rooms on a non partisan basis? Are you a room rater or a hyper partisan person that is the problem? We need less hyper partisanship on backgrounds at this time for our country. https://t.co/6oPKILYLZB

Room man, do a review of your ratings based on ideology and publish it. The backgrounds are varied but your bias is constant. Be honest. Try to make a difference. If not, you are part of the problem.

My dude, I’m a progressive democrat and @ratemyskyperoom gave me a 1/10 + claimed it looked like i was in a “hostage situation”. https://t.co/mep6YbHETo

I feel like Room Rater becoming the latest vehicle for conservative whining about not being part of the cool culture is the perfect swan song for this era.

We ascertain that while well angled, this book wall lacks light and respect for the rule of law. 0/10 @GSAEmily pic.twitter.com/K6O3gvOea2

Room Rater important PSA from Canada and our friend @brittlestar. Get your snow tires on and #WearAMask . 10/10 pic.twitter.com/vKMk3CeZCw

1. I can’t decide if he’s serious, being funny, or drunk-tweeting.
2. I can’t understand why he thinks 9/10 for a GOP strategist is evidence of liberal bias.
3. He was once planning to be the most powerful man in the world.
4. Room Rater once gave me 1/10. #justsayin https://t.co/cI1OB5iVE3

Gosh, I guess you really took that 6 personally. https://t.co/EpIsS0ZpNp pic.twitter.com/wIwKtAjrg9