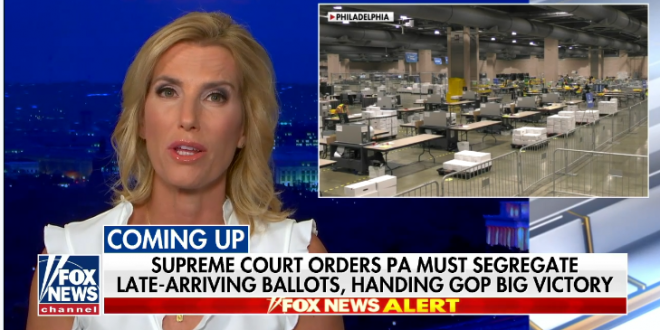 “We don’t know exactly what the Supreme Court will do but there is precedent for courts overturning the results of elections. Back in 1994, a U.S. District Court judge voided the results of a Philadelphia state senate election and awarded it to the Republican challenger because of rampant Democrat fraud. And it was a consequential race, too. It was enough to flip control of the state senate altogether.” – Laura Ingraham, on last night’s show.

Breaking on @MSNBC: NBC’s Pete Williams reports the Supreme Court has issued an order in the Pennsylvania case, but it’s not what Republicans wanted. Justice Alito repeats the guidance that post-Tuesday mail ballots must be segregated, but it doesn’t direct them to stop counting.

I would enter the order Justice Alito just entered, too. It means nothing. Just a prudential preservation of the status quo. (And that status quo turns out to be very bad for one Donald Trump.)

Lmaooo. TFW you’ve messed up Justice Alito’s Friday night over 947 ballots, in a losing race, that were already being segregated. https://t.co/5nqresEPbD