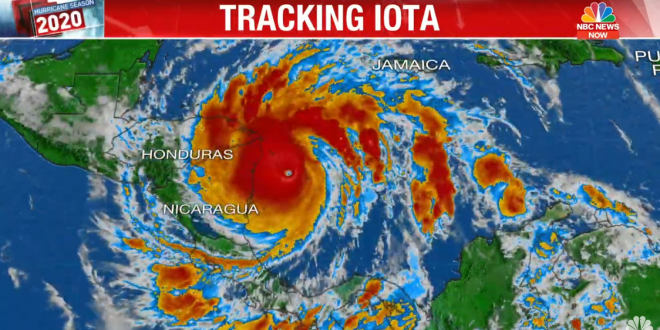 Hurricane Iota has gained speed and is now a 160 mph Category 5 storm just hours away from striking nearly the exact same part of Central America that Category 4 Hurricane Eta struck two weeks ago, according to an advisory Monday morning from the National Hurricane Center.

In 170 years of record-keeping, Iota is just the second Category 5 hurricane on record during the month of November. The last one was The Cuba Hurricane of 1932.

While meteorologists hustled to put the rarity of Iota’s strength for the month of November into perspective, it became clear that an imminent humanitarian catastrophe was likely coming for Nicaragua and Honduras.

Iota will make landfall late Monday night along the coast of northern Nicaragua, in the same area Hurricane Eta made its Category 4 landfall on November 3.

Incredibly, some additional intensification is possible as Iota tracks through a favorable environment that includes plenty of deep, warm water, favorable upper-level winds and a lack of dry air. It’s possible Iota could landfall at Category 5 intensity, though an eyewall replacement cycle is possible before landfall that could cap out its intensity.

Regardless, Iota is likely to be a catastrophic hurricane for Central America. This will be the first time on record two major hurricanes – Category 3 or stronger – made landfall in Nicaragua in the same hurricane season, much less only two weeks apart.

#Eta and #Iota, two weeks apart, when they were just hours from landfall.

Likely to be the first back-to-back major #hurricane landfalls in any single season on record in Nicaragua. pic.twitter.com/gQwsmNXm4O

Here are the 10 am EST Key Messages for category 5 Hurricane #Iota. Extreme winds and a life-threatening storm surge are expected along portions of the coast of northeastern Nicaragua. Life-threatening flash flooding is also expected in Central America. https://t.co/tW4KeFW0gB pic.twitter.com/CP5u0WQY5m

For the 1st time on record (since 1851), we have 5 straight years with a Category 5 #hurricane in the Atlantic.

The latest we’ve ever recorded a Cat. 5 in a year. Just the 2nd in November. pic.twitter.com/ejZiILvZm2