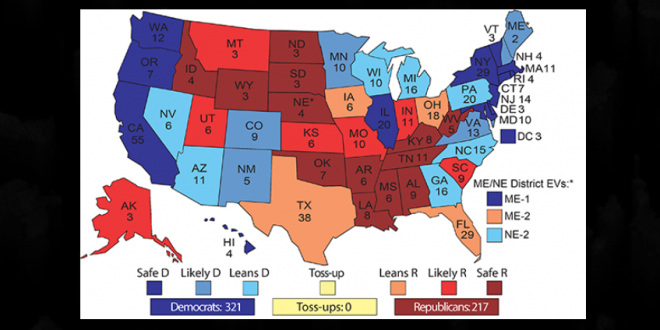 Sabato’s Crystal Ball predicts that former Vice President Joe Biden will win a commanding victory in the Electoral College on Tuesday, picking up the battleground states of Arizona, Pennsylvania, Georgia and North Carolina, among others.

The nonpartisan election analyst blog published by the University of Virginia Center for Politics released its final projection for the 2020 election on Monday, indicating the Democratic nominee will win a number of states captured by President Trump in 2016.

Biden restores some of the Dem Midwest strength and breaks new ground in Sun Belt pic.twitter.com/i5KIbGMVZX

Dems 50, GOP 48, 2 Toss-ups (both races in Georgia, where we are expecting Jan. 5 runoffs) pic.twitter.com/iuJaEbBB4R

Previous Bannon: Trump Will Declare Victory On Election Night And Then “We’re Going To Get In The Counting Rooms”
Next NY AG Gets Docs In Trump Org Tax Deduction Case