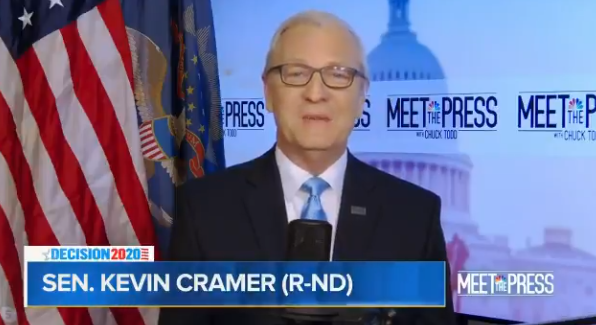 GOP Senator: “It’s Past Time To Start The Transition”

Sen. Kevin Cramer (R-N.D.) said on Sunday that it was “past time to start a transition” to a Biden administration adding he would “rather have a president that has more than one day to prepare.” The GOP senator told NBC’s “Meet the Press” host Chuck Todd that President Trump had the right to contest the election results though legal battles but also acknowledged an incoming Biden presidency.

“What they’re claiming is that there’s a lot of evidence and they’re presenting that evidence in cases. Now, it’s up to them to present that evidence, Chuck, obviously, and we’ve yet to see a real hearing where evidence was presented. And they’re not obligated to present it that you know yesterday or tomorrow, although the sooner the better from my perspective,” Cramer said.

WATCH: Sen. Kevin Cramer (R-N.D.) says “there has to be an end” to Trump’s fight to reverse the vote.@SenKevinCramer: “It’s past time to start a transition, to at least cooperate with a transition. I’d rather have a president who has more than one day to prepare.” pic.twitter.com/joIsn7unz3

Previous AP: Russian Hospitals Overrun With COVID Patients
Next Chris Christie: The Conduct Of The President’s Legal Team Has Been A “National Embarrassment” [VIDEO]